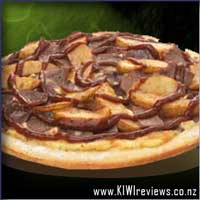 Disclosure StatementFULL DISCLOSURE: A number of units of this product have, at some time, been supplied to KIWIreviews by the company for the purposes of unbiased, independent reviews. No fee was accepted by KIWIreviews or the reviewers themselves - these are genuine, unpaid consumer reviews.
Available:
for a limited time

The MANS pizza steak and chips what more do we need? - Don't answer that. :) Very tasty and very filling, good amounts of both wedges and meat. The bbq sauce goes very well with it too.
This pizza with, as well as the chicken and wedges is a very belt busting meal, yet you want to come back for more.

Of the three newest flavours to hit the Domino's menu, I found this to be one of my favourites. I liked the big hunks of meat and the strong flavour of the BBQ sauce. The wedges tasted a bit starchy but added some nice texture to the meal as did the chunky-cut onion too. I wouldnt call it my overall favourite Domino's foodstuff (that honour still sits with their Chicken Kickers) but it sure sits high up on the pizza list. Congrats Domino's you have totally converted me away from those skodie Pizza Smucks across the road.

We got this one as part of a GAMESnight feast, and it attracted some modicum of attention. Steak and Chips sounded just too interesting to overlook. The response was mixed, to say the least, but I personally found it to be quite a tasty dish. It even tasted good reheated, though the wedges suffered from nuke-itis.

I thought it would have been somewhat improved by making the onion chunks a bit smaller, and maybe adding a bit of pepper sauce or garlic to the mix... just for some extra kick.

Overall, a seriously interesting flavour, worth investigating if for no other reason than it's off the beaten track and takes the edge off the usual menu of choices. Oh, speaking of edge... we got it on The Edge crust which really made it all it could be, plus a bit more. Sticky fingers be damned, this was worth a bit of sauce on the digits.

As I have said before, I have a problem with barbecue sauces making me ill, unfortunately this pizza topping has 2 lots so I approached it with caution. There was plenty on the pizza, with The Edge crust making it possible to enjoy the pizza and not worry about getting to a possibly chewy crust.

The steak pieces, I felt, were few and far between. They were definitely there, I saw them, but there seemed to be more cheese and potato wedges. The use of wedges on this topping had a tendency to be quite greasy and soaked up more from the surrounding cheese. Halfway through, the double dose of barbecue sauce became too much and I had trouble finishing.

I doubt I will order this again, wasn't really too impressed.

Tender slices of lean 100% beef are seasoned with a blend of sweet seasonings & zesty hot spices and then cooked in a smoke oven. Made with 260g of beef per 100g finished product.