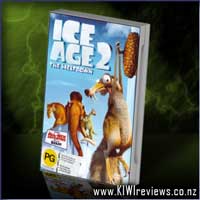 Your favourite sub-zero heroes are back for another incredible adventure in the super-cool sequel to the global hit comedy Ice Age!

The action heats up - and so does the temperature - for Manny, Sid, Diego, and Scrat. Trying to escape the valley to avoid a flood of trouble, the comical creatures embark on a hilarious journey across the thawing landscape and meet Ellie, a female woolly mammoth who melts Manny's heart.

I really liked the comedy of the movie, Manny wondering if he was the very last mammoth and if he was destined to be alone forever and then he bumped into Ellie and the fun and antics that follow. The voices are great, you can hear that the actors are having a great time and really enjoying it.

The story is great, it is impossible to know what exactly happened so this movie was great, the writers used great imagination and really made the story believable. The characters are good, my favourite was Ellie as it is a part of life to wonder who we are and try and fit in but my kids really loved Scrat and his hunt for the acorn and everything he goes through to try and keep it to himself.

I would love to watch the DVD extras but the kids keep wanting and asking to watch the movie, it would be great to see how things are done and how the writers came up with the ideas. I'm not that creative but wish I was a bit more creative.

I would recommend the story to anyone with kids who want a bit of a break from the senseless "kids movies" that have no story and lots of senseless actions.. kicking and fighting for no reason.

My daughter and I sat down to watch this today as she was having a sick day. This is a great movie to lie on the couch and watch in a darkened room. I really enjoyed the original Ice Age movie, so the opportunity to re-visit the gang and see how their unusal herd was going was just neat.

Manny, Sid and Diego are still stuck together in a much more love than hate kinda relationship. They find themselves in a dire situation with the ice melting around them. This is a fairly simple race against time plot with a couple of nice sub plots giving the characters more depth.

The introduction of Ellie is nice and gives some softness to the all male herd. This being one of those subplots - boy meets girl, boy makes arse of himself, etc. That relationship also allows the gang more opportunities to get together, and they do in 3 and 4.

There are some nice musical numbers which get you singing along. Even when you think, I shouldn't be singing this. As Sid says "catchy". The highlight of any Ice Age film is Scrat. Watching him get flattened in the pursuit of his beloved acorn nut. My daughter and I loved this film and have watched it twice already today.

The first movie was wonderful... and though this was another hilarious movie it did suffer from a mild case of sequelitis. With all the same amazing rendering, and the same core characters as well as a pile of new ones... it had a margerine plot; soft and spread a little thin in places.

However, ignoring an adult perspective and just going by my young son's reactions, this will still be another winner for the family bookshelves. Plenty of humour, and a highly entertaining scene with Sid and his worshippers (You have to see it to really get it... but let's just say that Sloths Acapella could be a hit stageshow in the style of Lion King.)

Overall, a great stocking stuffer if your kids enjoyed the first movie.

Set in Middle America, a group of teens receive an online invitation for sex, though they soon encounter fundamentalists with a much more sinister agenda.