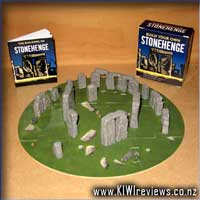 Build Your Own Stonehenge product reviews

What could have possessed an ancient civilisation to drag more than 150 rocks for miles over steep land and waterways to the Salisbury Plain?

To this day, the answer remains a source of contemplation for the greatest of scholars, and now you can join in the speculation! Explore and replicate the magic of this extraordinary monument with 16 Stonehenge rocks, a beautifully ladscaped mat, and a 32-page guide explaining the mysterious building of this ancient wonder.

I wasn't sure what to expect when I got this, but it looked pretty nifty, and gave me a good idea on how to pass a rainy afternoon with my young son. After giving the Golden Snitch Sticker Kit a try, I was hoping there would be a bit more to this one. I was very happy to see I was right.

The mat assembles from the 9 panels in the box, and they are clearly marked where the plastic 'stones' are to be placed. If you assemble the mat upside down, you'll find some helpful instructions printed on the underside, suggesting that a dot of PVA glue could be used to secure the 'stones' for a more permanent display. I took it one step further and actually glued the base pieces onto a piece of thin customwood, then glued the plastic 'stones' onto the base.

After that, at my son's suggestion, we popped outside and scoured the driveway for some suitably sized bits of gravel, which we began to glue over the printed images of stones, easily adding extra detail to the whole model. Some of the extra stones needed to be shaped a little, by carefully chipping at them with a coldchisel and a small rockhammer.

Overall, this is probably one of my favourite of these little kits, because not only did it occupy *4* rainy afternoons, but it captured my son's imagination and gave me an opening to educate him about something a little more 'special' and somewhat 'mysterious' than the more bland educational fare.