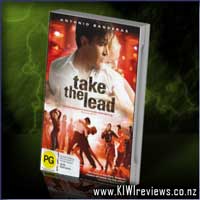 They're disruptive, uncooperative and uncontrollable - with attitude to match. They are the students of a hard core Bronx high school - and they are on permanent detention.

The school has no idea how to control them, let alone encourage them to learn. Enter Pierre Dulaine: a suave, charismatic ballroom dance teacher who believes taking kids off the streets and onto the dance floor is the way to change them. It seems an impossible task: these students are more comfortable with their fists than their feet and hip-hop rather than Nat King Cole. But the ability to move people through dance is overwhelmingly powerful and when Dulaine's skill meets their hidden passion, the students are transformed - and a new style of dance is born.

A warm gentle tale, inspired by a true story, "Take the Lead" was a little slow, but still a thoroughly enjoyable movie. With moments of tension and sizzle throughout, Antonio Banderas' character "Mr Dulaine" works with a bunch of kids stuck in detention every day after school, as he sets about showing them a different style of dance from what they're used to. As the "dungeon kids" start to learn the moves, they begin to integrate their own style with the ballroom, adding spice as Mr Dulaine teaches them a little class, culture, dignity, respect (both for themselves and others) and to believe in themselves.
The special features on the disc are also interesting to watch, especially the section about the REAL Mr Dulaine, and meeting the actors who play the "dungeon kids".
Overall an enjoyable movie that's worth watching by those who enjoy dancing and movies with a hint of "rags-to-riches", and one that shows that even a "reject" can instead simply be someone waiting to make a choice!

At the start of his second year of his amazing journey into the world of wizardry, cars fly, trees fight back and a mysterious elf comes to warn Harry Potter at the start of the second year. This year at Hogwarts, spiders talk, letters scold and Harry's own unsettling ability to speak to snakes turns his friends against him. From duelling clubs to rogue Bludgers, it's a year of adventure and danger when bloody writing on a wall ... more...