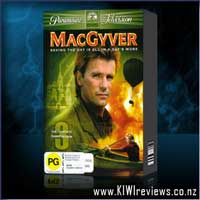 MacGyver is no ordinary secret agent. He never carries a gun. His drinks aren't shaken or stirred. And he fights for justice using the most dangerous weapon of all: his intelligence.

Richard Dean Anderson stars as television's favourite boy scout-turned-action hero: Angus MacGyver. When an American pilot is shot down over Central America or a top-secret missile is stolen, the authorities call on MacGyver, a former Special Forces agent, to save the day.

As far back as I can remember, my father used to drum into me the idea that there is always more than one solution to any problem, that lateral thinking held the key to overcoming any obstacle. This ideal is embodied by the character of Mac, a man for whom danger holds nothing more than a challenge to overcome.

Season 3 has some of the better episodes, though there are less of them than previous seasons. My favourite would have to be the return of Murdock, the insane assassin who loves to take photos of his victims' moment of death. Yup, he rears his ugly head again, though with hardly better results.

Season 3 also sees the regular appearance of Nikki Carpenter, played by Elyssa Davalos, who strangely enough appears in the first 2 episodes of the season as a lost love of Mac's, called Lisa, a Russian agent. OK, so it gets a bit confusing, especially if you then add in that the actor who plays Pete Thornton, a regular in this season, also appeared back in Season 1 as a CIA agent called Andy Caleson, though in the offical credits he is creditted as the character of Pete Thornton... it all gets a bit confusing unless you just ignore any past episodes and take each one on it's own merits.

Overall, this would have to to be the best season yet, but with 4 more seasons to come... well... you'll have to get them all and watch them to make up your own mind.

Score: 10.0
Product reviews for listing 2029: Jane and the Dragon - Last of the Dragon -  Type of Show: Children's Animated Series

Twelve year old Jane is a strong-willed girl who defies convention to follow her dream of becoming a knight. Brought up in the Royal Court to be a lady-in-waiting, a combination of determination and good fortune has made her dream come true.

Jane, her clumsy friend Dragon, and the many other eccentric and endearing characters who live in the castle find themselves a series of comical adventures, while teaching children the importance ... more...