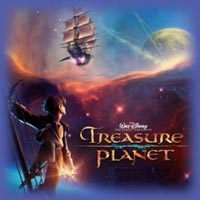 In the tradition of classic disney storytelling comes a spectacular new family tale about a courageous young boy in search of his destiny, who finds an adventure beyond his wildest dreams.

A legendary treasure map inspires an intergalactic treasure hunt when determined teen Jim Hawkins stumbles upon a map to the greatest fortune in the universe. As cabin boy aboard a glittering solar galleon, Jim is befriended by the ship's cyborg John Silver, and he thrives under his guidance, showing the makings of a fine space explorer. Fighting for their lives on Treasure Planet, Jim and his playful sidekick Morph meet up with a hilarious robot named B.E.N. Together with the clever Captain Amelia they discover a treasure greater than they ever imagined.

Buckle up for thrills and excitement as the directors of The Little Mermaid and Aladdin give Robert Louis Stevenson's timeless tale, Treasure island, a sensational, futuristic twist for an all-new generation. it's an experience the whole family will enjoy over and over again.

As an avid Robert Louis Stevenson fan, I approached viewing this 'version' of his classic work 'Treasure Island' with a great deal of trepidation. Sadly, it seemed, my fears were a little more well-founded than even I at first thought.

Taking into account that this movie is a cartoon, I was prepared for some weird and wonderful characters. I was not disappointed. A bumbling benefactor, a feline captain and a cyborg cook with a shape-shifting side-kick were just some of the colourful characters that graced the storyline.

Given that the original story this film is taken from takes place on the sea, I have serious issues with the directors' choice to move it to outer space. And the whole idea of keeping the the 'sailing ships' in space, is the deciding factor behind my low believability score, even with it being 'toon-y.

I had to laugh... "Treasure Island" meets "Titan A.E.", with a dash of "Monty Python" strung through the funnier bits. With characters as wide and as varied as any space drama (and despite the high proportion of humanoid shapes, they WERE clearly aliens!) this was a cool flik to watch.

I firs thought "It would be great for the kids" but honestly, anyone under 10 probably wouldn't appreciate, or handle, this one. Too scary for the wee ones, too boring for the rest.

The level of animation was great, and that kept me going far more than the storyline itself. Though I loved the book, and this was a great adaptation of it, the story didn't really have any new twists or anything 'unique' - aprt from the setting, of course.

As for believability... OK, so this is a 'toon flick, agreed, but you didn't so much have to suspend your disbelief, as expell it and lock it up for duration of the film, else it would leap out and scream at you all the way through, ruining a fun movie.

The technology in play in the movie was kinda cool... (I want a big glowing portal in my lounge, a big hover-thruster board, a solar sailer, a cyborg arm and and and...) and I loved B.E.N's psycho antics... but overall, my main comment would just have to be...

I WANT A MORPH! GIMME A MORPH! Hehehehehe.

After getting over the revelation that she is a princess and part of the royal family of the small and obscure European nation of Genovia (with a population of just 50,000), American teenager Mia (Hathaway) moves to the actual country she represents, with her best friend, Lilly (Matarazzo) tagging along during summer vacation.

As she learns the job of being a country's future ruler, one challenge she's faced with is the prospect of being set up in an arranged marriage.