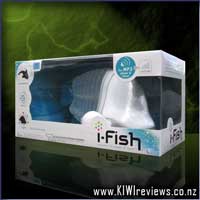 Keep the music playing with this fabulous fish that plays back through its built-in speaker or your headphones!

i-Fish entertains you with electronic lights, movements and sounds based on the music you play!

Requires 3 "AA" batteries (not included). Includes dual-plug cable. Recommended for ages 8 and up.

Your Baby Can Read
Rating: 9.0

This is an interesting toy to say the least. It chirps, it beeps and it blinks, oh yeah and it's a speaker to boot.

The i-fish has different moods, but to be honest I had trouble differentiating between them, but then i'm also tone deaf so who am I to judge

But it is a unique toy and my kids will no doubt have many fun filled hours with this wee chap, and whilst it will keep them occupied I doubt if I will get much quiet as they will be making all sorts of noises to see what the fish will do when they yell, scream and laugh.

It is a good addition to the i-toy family like the i-dog and the i-cat and I wouldn't be at all surprised if there weren't more i-animals still to come.

When I first took the fish out of its packaging, it struck me as a rather funky looking toy and I set to exploring its functions with great curiousity, rather looking forward to having this fun little fish dancing away on my desk to my favourite tunes. Turning it on, I was greeted with an enthusiastic bubbling noise, then a series of other musical sounds as it wiggled and tried to dance about on the bed- seriously NOT the best of places to give it a test run (well... DUH!!). Hooking it up to the laptop, I soon had it playing a selection of music, and found that the sound was definitely better than what normally came out of the tinny li'l speakers built into my laptop, but was rather disappointed to find that the volume controls on the fish simply did not want to work!
However, the fish was given a serious work out during a trip up north- 13 hours up, and 11 hours back- as it was set up in a sling of shoelaces by my partner (after we got sick and tired of it trying to break free from it's Velcro shackles as it attempted to boogie its way across the dashboard, and then I got rather annoyed with having it sitting on my lap instead and feeling it wiggling about- rather weird sensation I will admit, but lets not go there... lets just say it's not a suitable place for a wiggling fish!), to hang beneath the radio. There it was attached to the portable CD player, and whenever the car stereo decided to play more static than music (which was most of the time), the fish was usually started up, and left to sway and wiggle as it hung back to front, as it provided our "sounds" for the long journey. All in all I think it did pretty well considering- it didn't chew up even one set of batteries, and made the car look all pretty at night as we drove. Only things I found not so good with using it this way, was the very limited volume which wasn't the greatest in quality either (but still better I guess than what was initially expected from it), and it's annoying habit of turning itself off every 20 minutes- took a couple of times of the music suddenly falling silent for me to realise the fish had gone to sleep, but a gentle nudge in the right place and it was back to its usual flapping and wiggling about with good sounds and pretty lights.
Definitely a fun little "extra" to have, especially if you have kids (my son loves watching it), but can get a little annoying after a while with its dancing- however, it does have a way to turn the movement off, which would have been handy if I'd remembered it during the trip, so the problem is solvable... and really not the greatest substitute for a car stereo!!

A colourful soft fabric ball with rattle inside & lots of tabs for little hands to grasp and hold on to.

Perfect for a baby gift for either a boy or a girl. Your baby will have hours of fun with this great Lilly & George Ball.