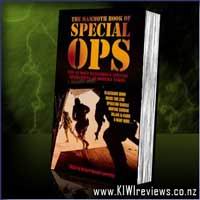 Disclosure StatementFULL DISCLOSURE: A number of units of this product have, at some time, been supplied to KIWIreviews by the company for the purposes of unbiased, independent reviews. No fee was accepted by KIWIreviews or the reviewers themselves - these are genuine, unpaid consumer reviews.
Available:
Oct 06

The once shadowy activities of special forces have grown into an increasingly exposed element of 21st century warfare and anti-terrorist activity. Here, in one giant unputdownable volume, are 40 of the most dangerous special operations of modern times.

Drawn from the flashpoints of the world, and above all Iraq and Afghanistan, these first-hand and reported accounts of missions by the SAS, Delta Force, Green Beret, Commandos and other forces will leave you on the edge of your seat.

The accounts include:
•  Blackhawk Down - the US Delta forces debacle in Mogadishu, Somalia, 1993
•  British Special forces fight Al Qaeda at close quarters in Afghanistan 2003
•  Task Force Raider - US Special forces teams track down Saddam Hussein, 2003
•  The British 'Blackhawk Down' - Paras shoot their way out of trouble in Majar, Iraq 2003
•  The capture of insurgent leader Chemical Evil Fat Mama, Fallujah, November 2003

Dancing with Cranes: On location with a New Zealand wildlife film-maker
Rating: 8.8

THE MAMMOTH BOOK OF SPECIAL OPS is a fact-filled series of quick-reads, Packed with information, and short enough to keep the reader interested.

With over fourty tales, the true stories written by those inside the action.
Be it the action team on the Siege of the Iranian Embassy, in 1980, to snipers in Viet Nam, to reporters embedded in Squads in the latest war in the Gulf, this book relays true stories from times of special forces between 1960 to today.

What really happened to "Andy Mcnab", "Chris Ryan", and the six other soldiers of the Ill-Fated Bravo-Two-Zero? What goes through a Reporter's mind, as live ammunition flies mere millimetres above his head? What happened when Saddam Huessein was captured? These are all answered in this book.

This is a Great Book, Without a Doubt value for money, easy to lose track of time in between the action packed recounts of these missions.

A Definite Must Read for any military enthusiast.

Piggity-Wiggity Jiggity Jig was a smart sort of name for a small sort of pig.

Piggity-Wiggity has been feeling a bit poorly, so Mum has a special treat in store for him... a trip to Dad's Cafe for lunch!

But Piggity-Wiggity doesn't recognise all those fancy foods on the menu... whatever will he eat?