The Master Of Whitestorm review 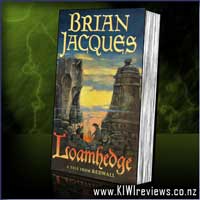 Loamhedge, the deserted Abbey, forgotten for countless seasons. What secrets do its ruins hold?
Martha Braebuck, a young haremaid, wheelchair-bound since infancy, wonders about a mysterious old poem relating to the ancient Abbey. Could it really be the key to her cure? But how could she get to this Loamhedge? As fate has it, two old warriors, travellers returning to Redwall Abbey, are inspired by the spirit of Martin the Warrior to quest for the ancient place - and three young rebels are determined to go with them.
In another part of Mossflower Country, the giant badger Lonna Bowstripe thirsts for vengeance as he relentlessly hunts down the Searat Raga Bol and his murderous crew. He pursues them unto the very gates of Redwall - and finds valiant Abbeybeasts defending their home against the conniving band of marauding vermin!
Riddles, feasting, songs and battle intertwine with the forces of good and evil in this epic saga. Join the heroes in their far-flung mission. Stand on the ramparts with the Abbot and his friends. Face the Foebeast at the Abbey of Redwall. Take the high road to adventure in the search for the hidden secret of Loamhedge! Eulaliiiiiaaaaaaa!

Brian Jacques has been a favourite author of mine since I was a teenager, and I have read every one of his "Redwall" books that I have been able to get my hands on... which is most, if not all of them. 'Loamhedge' has sat in my collection for a while, but I finally got the chance to dive headfirst back into Mossflower country and read it! Another fantastic novel for sure. As usual, I was hooked from page one, and found it difficult to put down, which usually meant walking around doing chores etc. with book in hand, and nose well and truely buried within its pages.
With Jacques' usual mix of humour, adventure, delicious descriptions (honestly, the way he describes some of the food the creatures eat has my stomach growling on many occasions! Plus it is very easy to see the woods around me, and the characters with his well worded in-depth descriptions that build the world visually around you as you read), and enthralling plots, 'Loamhedge' has lived up to expectation, and I would more than willingly pick it up for a reread if I was without anything new to read.
A must read for any Brian Jacques fans, or even just those who enjoy stories full of adventure. A great book too, for reading aloud to the kids... but be warned - it helps if you're good at doing accents, as there are several different ones in there (kind of fun too trying to pick where the accents of each type of animal comes from *grin*), but it just adds for extra fun (and plenty of giggles from the kids) with the reading... as I found out when I read one of Jacques' other Redwall books to my son.

Jack Russell lives with his landlord, Sarge, in Doggeroo. Sarge detects human-type crimes. Jack detects important crimes. That means the ones that deal with dogs. Whenever there's a mystery that needs solving, Jack is the dog for the job. Though he is often hampered by the well-meaning but bumbling Red, he always manages to sniff out the truth in the end.