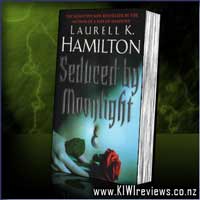 Disclosure StatementFULL DISCLOSURE: A number of units of this product have, at some time, been supplied to KIWIreviews by the company for the purposes of unbiased, independent reviews. No fee was accepted by KIWIreviews or the reviewers themselves - these are genuine, unpaid consumer reviews.
Available:
in good bookstores

Some know me as Meredith Gentry, P.I. while others know me as Princess Merry, heir to the throme of the Unseelie Court. There are those who whisper that I am yet more. They fear me. And who can blame them? I seem to have awakened a dazzling magic that has slumbered for thousands of years. if only I knew why.

My Aunt, the Queen of Air and Darkness, has turned her malign gaze full upon me. While no child has come of decadent nights spent with my immortal guards, something else has happened to me.

it all began with the Chalice, a Relic or Power. i dreamed of it and when I awoke it was there with me. My guards know this ancient relic well, for its disappearance so very long ago stripped them of their vital powers. And now it is back. My touch resonats with its force, a magic that courses through my half-mortal, half-fey body.

Third in the saga of Meredith NicEssus' attempts to avoid death, by becoming pregnant, and thus claim the Unseelie throne before her cousin Cel manages to beat her to it and then kill her. And though the first 2 are quite raunchy and titilating, this installment has more, shall we say, detailed accounts of Merry's exploits...

...and quite frankly, they get a bit tedious by half way through the book. I found the first two quite hard to put down, but this one wasn't so hard to put aside when other matters required my attention. Which is a shame really, because buried in amongst the gratuitous and copious amounts of kinky sex, there is a great storyline trying in vain to break through to the fore.

Sure enough, there is a lot of violence, some new charatcers, a LOT of the old ones showing up and demanding blood/flesh/sex from Princess Merry, which she usually gives up in various combinations, and the appearance of a lost relic of great power, but all in all, it wasn't Laurell's best work, methinks.

Overall, if you are looking for some slightly less than tame reading, this will hold some appeal, especially for the mid- to late-teen female demographic, and it has some rather... educational... sections... but for the serious fantasy reader, there are other titles out there you will probably find more absorbing, such as the works of Kelley Armstrong, which hold much of the story and far less of the sex.

This is a rhyming story about a pohutukawa tree that grows down by the 'sleepy, blue sea'. Bees, tui, geckoes and bats all feed on the tree, but the possum threatens the life of the tree, until a boy comes to the rescue and catches the pest. The cycle of life continues and the seeds of the tree are blown to the ground. New seedlings spring up and soon there are more trees by the sleepy blue sea.