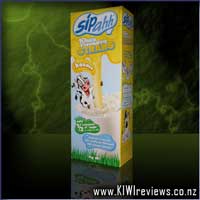 What is Sipahh?
Sipahh is a milk flavouring straw that wakes up milk.
It makes milk fun and helps ensure kids get the vital calcium they need in their diets.
Simply dip into cold milk, Sip, and say Ahh!

How does it work?
Every Sipahh milk flavouring straw is filled with our special UniBeads that contain all the flavour and excitement that Sipahh delivers.
As the milk is sipped through Sipahh, the UniBeads dissolve and turn boring white milk into a healthy snack that everyone can enjoy.
Simple and fun!

My children and myself love a good flavoured milk, but I found it was becoming far to expensive to be buying normal milk as well as bottles of flavoured milk (especially when a 2 litre bottle was in excess of $5), even more so when one has 3 children and each wants a different flavour (banana, strawberry or chocolate)....compromising with small children is not always easy.

When I discovered these Sipahh straws, I was keen to give them a go. I found the price a little to high for my liking but figured, that long term, the costs involved would be worth it. I hate to be the one to say it, but what a horrible little product. The flavours are fine, but the straws are horrid. Fat straws filled with unibeads that apparently dissolved and turn your sad milk into flavoured milk.

About the only great thing with these is the convenience, oh and the fun they produce for kids. But thats where it stopped for us. My kids only ever tried the banana, and never asked to buy them again.

My daughter loves flavoured milk, but sometimes it runs out too fast in the week. So we have starting buying this product. I usually get a box of each flavour so if she wants a drink she can say what flavour with "white milk" that she wants. She loves banana.

I like the taste of banana flavoured milk, but I found this one difficult to get the taste right. In a 250ml glass of milk, my glass was finished long before the beads. If I sucked too quickly there wasn't a lot of flavour, and when I went at a speed I thought a child might it was incredibly sweet, almost like drinking straight sugar.

I didn't find this product that great, and think it is too sweet for kids.

Another great flavour, banana flavour is one of my favourite flavours for milk and this one made the grade easily.

Again, some troubles with milk to bead ratio but I'll get there!

Not usually a big Banana fan, but loved this flavour!
Easy to use straw that kids love.

Wasn't too sure what to expect before opening the Packet. Thought maybe a carefully measured amount of flavoured powder, but was pleasantly surprised. The kids can make their own milk shake with these with no mess and no hassles. Great product!!

Another great flavour, this one would have to be running a close second place in the ranks for me. Plenty of flavour, and if you want to adjust the flavour you need only sip harder of slower. Not as good value for money as a can of flavour from one of the competing brands, but a lot tidier to deal with, and you can take this on the move and just buy plain milk at a supermarket on your trip.

I wasn't quite sure what I was expecting with these straws... would they have powder that you tipped into milk? If it stayed in the straw how did that work? Were the straws themselves flavoured?

So I approached straw usage with some trepidation. Opening the first packet I was interested to see a semi-closed off straw with little balls of coloured stuff (quite possibly the flavouring). I plonked the straw into some milk, and promptly wandered off. When I came back a few seconds later I took a sip through my straw and was thoroughly slapped in the face by flavour! After a few seconds of enthusiastic straw sucking to clear the back-log I found I was only halfway through the flavouring in the straw, but dangerously close to running out of milk! After topping up my glass I managed to run out of straw before the milk was gone.

My second straw was more cleverly managed and I got a nice balance of flavour and no milk left over afterward, although I did discover that rate of suction really does make a difference to flavour intensity. I found the straws to be a little bulkier than I liked, but the tastiness really outweighed any issues :)

These straws are a fantastic way of having a milk drink wherever, without the hassle of carrying perishable milk around with you. It was so handy for me to take one to work, pour myself a glass of milk and drink it through a flavoured straw - voila! Flavoured milk! I was also able to give them to my son to take as part of his afternoon snack, he loved them - thought they were cool, and it was a great way of getting him away from sugar-filled juice (these straws claim only one and a half teaspoons of sugar).

As a rule I really don't like banana flavouring, and to be honest this was no different. The other family members that tried it did like it, however didn't find it to be particularly different to normal banana milk. Mostly they admired the coolness and convenience of the straws.

Hmmmmmmmmmmm, banana......... (Opps sorry had a Homer moment there for a second). Now this is one of the nicest banana tasting milk flavouring I have had in a long time and that means I will be buying these a quite a bit in the future.

Oh and of course i'm sure my kids won't mind either.

I am quite partial to a glass of 'nana milk when time and resources allow, so I was well pleased to find that this variety of Sipahh straws had all the good points, and none of the bad ones associated with the more usual cans of milk flavourings, such as spilling some of the pwder as you transfer it from can to glass, leaving you with either a mess to clean up, or a feast for the ants.

As usual, it was so simple to use that it almost defies logic that it wasn't invented and on the supermarket shelves a decade ago, but hey... better late than never really.

Overall... yup. Went out and bought a couple of boxes to sit on the shelf next to my son's Chocolate straws... and I just know he's going to be pinching a couple of mine.

I dont know if it is even possible to mess up a Banana flavoured milk. And this product helps prove the point. This product is simple, and easy to use, even (as demonstrated) a six-year-old can use it.
Step 1) Fill glass with milk
Step 2) Unwrap Straw
Step 3) Put Sipahh straw in glass
Step 4) Use as regular straw (drink through it).

I think I may have some trouble distinguishing this from the commercially produced, already flavoured, milk.

Was very happy with this product.

I have always been a fan of anything banana flavoured and when you add milk, even better. I was looking forward to trying this flavour when I got the chance and I wasn't disappointed.

The design of the straw is great, with holes in both ends to let the milk past the flavour beads. I am not really sure what they are made of, but they are designed to dissolve at a steady rate which is a good idea. I found that if I stirred my drink I was able to get a sligjht flavouring through the whole drink. It wasn't quite as strong as when I drank through the straw, but it was there.

These straws would be a great incentive for kids, to get their daily calcium. Add one or two a week to the schoolbag with a drinkbottle of milk and you have a healthy drink for midmorning break. And with only one and a half teaspoons of sugar, it will give a boost without making kids too hyper.

A sparkling, medium classic pear cider, with a well-rounded flavour and a smooth, subtle finish.