« Any Given Thursday review 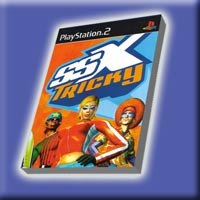 SSX Tricky is coming straight at you with insane, sick UBER tricks, surreal mind-blowing worlds and a cast of funky-fresh characters.

Blast down the tracks at all-out speeds and suck up the bigadrenaline you've ever inhaled. All of your favourite SSX courses are tweaked for more speed, more elevation and more insane thrills, plus there are two wild new tracks that will blow your mind.

Hit the mountain harder with SSX Tricky. The sky is your stage.

I played this when it first came out... I was working in retail sales at the time, so had access to a demo console and lots of cool games. Problem was, I didn't like games, but this was all that was on the machine at the time. So, I grabbed the handset and had a blast, competing against a co-worker who was a gamesmaster already. Of course, he whupped my sorry butt and wiped the floor with me. Oh, the shame. :)

After a few serious thrashings at the hands of the guru, I decided to give it a serious go, and was hooked within the day. Seriously, snowboarding hold ZERO appeal for me in the real world, but this game was cool.

Lots of tricks to pull off, heaps of 'air' to 'grab', and a surprisingly high level of interaction between the riders. The NPC AI is very advanced, giving a level or realism hardly seen in that day.

Now that this game is Platinum Edition, the price makes it very appealing, so I grabbed a copy and went home for a refrsh of the thrills. Even after a year without it, and access to other snowboarding games of a newer vintage, this game still holds great appeal for me.

Overall, I would class this as a classic must-have for any sports-freaks who own a PS2.

Batman and Robin return in LEGO Batman 2: DC Super Heroes, the highly-anticipated sequel to the best-selling LEGO videogame of all time, which to date has sold more than 11 million units worldwide. This time the Dynamic Duo join forces with other famous DC super heroes including Superman, Wonder Woman and Green Lantern to stop the notorious ... more...