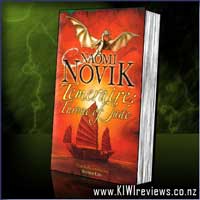 The battle for Europe rages upon the land and sea... and in the skies. Squadrons of aviators rain fiery death upon their enemies, but the destruction is not caused by gunpowder alone - it comes from the very guts of the beasts that are flying: dragons.

Temeraire is a Chinese Celestial dragon, the most highly prized of all the draconic breeds; famed for their intelligence, agility and most of all for the Devine Wind - their terrible roar capable of shattering the heavy timbers of war ships and devastating vast swathes of infantry.

Delivered into British hands by the Trade Winds, Temeraire was intended to be a companion to the Emperor Napoleon, not to be captained by lowly naval officer, Captian William Laurence. Together they help the French from the shores of Dover, whilst Nelson fought bravely at Trafalgar. But tidings of Temeraire's fate have reached the Chinese, and they furiously demand their dragon's return. The British government cannot afford to provoke the Asian super-power into allying with their enemies - even if it costs them the most powerful weapon in their arsenal.

The Lives of Christopher Chant
Rating: 9.8

The tension builds basically from page one in this book- will Captain Laurence get to remain with Temeraire now that the Chinese have caught up with them and are demanding their dragon back? Almost the entire book is about Temeraire and Laurence's journey by sea to China, with Prince Yongxing (brother to the Chinese Emperor) and his assorted staff aboard causing all sorts of mischief, from trying to coax the dragon's affections away from his beloved Captain, to trying to convince Laurence to betray his now closest companion by lying to him then leaving, and even several attempts to kill Laurence. Again Novik blends a hint of fantasy with historical Britain in a way that captures the reader from the beginning, enticing them to keep turning the pages until the very end, where a rather surprising twist awaits.
Although maybe not quite as gripping as book #1, "Throne of Jade" is a great sequel and definitely has me keen to move onto book #3, "Black Powder War" and see just where this story will take this rather intriguing pair.

Discovering there was a sequel to Temeraire put a smile on my face instantaneously, and I was vastly impatient to get my hands on the book itself...
And once I did, well, let's just say it got read in a rather short space of time - only sleeping interrupted my reading of this wonderful addition to the story line...

I will admit to being rather shocked at the book starting so abruptly on a whole new story line, I am used to sequels starting very near to the end of the last book, whereas this one throws itself straight into a whole new twist in Laurence and Temeraire's lives...

The circumstances of how Temeraire came to be on a ship headed for France are discovered, and now the Chinese are determined that he should be returned to them...

The story chronicles the how's and why's of Temeraire and Laurence's enforced journey almost all the way around the world, their adventures along the way, including plots to do away with Laurence so that Temeraire will bond with another, battles with the French, a giant sea-dragon and the weather...

Upon arrival in China, Temeraire (and Laurence) discover a whole new way of life for dragons - one where they intermingle with the people freely, where Celestials are meant for study only, and where Temeraire discovers the delights of the companionship of Mei, a female Imperial Dragon....

But the fight for control over Temeraire is not over, and a battle ensues... and eventually the perpetuator of the aggression towards Laurence is discovered, along with the reasons behind it all...

I was enthralled again by the author's wonderfully descriptive writing and look forward to reading more books about Laurence and Temeraire's adventures as they return home to England to re-educate the other dragons about just how they can be treated - not as slaves or servants, but as equals, revered by all...

"According to the heathen legend, Lorandranek, the last king of the Harshini, sired a half-human child. They call him the demon child ..."

The Sisters of the Blade rule Medalon with an army of elite Defenders to enforce their oppressive rule. R'shiel Tenragan and her half brother, Tarja, find themselves caught up in the political intrigues of the First Sister - their mother Joyhinia. R'shiel is to be shipped off to a ... more...