In The Forest Fey review 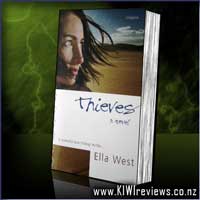 Nicky has a secret. Now you see her: now you don't.

She has the ability to disappear and reappear in another place - her gift controlled through the powers of thought alone.

Someone else has discovered Nicky's extra-sensory talent: a group called the Project. Anonymous, benign in manner, yet also sinister in its secrecy, the Project spirits Nicky and four others away to a desert hideaway.

Constantly monitored by security, taken from their families and even their own countries, Nicky and her fellow travellers are gradually pushed into a world of espionage and intrigue.


A powerful and chilling thriller from an exceptional new talent.

You're Not Listening: What You're Missing and Why it Matters
Rating: 9.3

I'm not sure I would call this book a chilling thriller... but it was certainly a good read.

Was interesting to have a book written in the first person - you don't tend to come across that many of them these days...
Luckily the author was able to stick to this theme well and wrote convincingly as a 14 year old girl who was going through some pretty major changes in her life...

Nicky is taken from her boarding school, her parent die in a suspicious accident and she still has to deal with being a teen in a new environment with a boy she likes, and others she doesn't feel that she fits in with...

And then there is the reason she was taken... Nicky can 'travel' from one place to another at will - she literally winks out of existence in one place and reappears somewhere else (her closet most often, 'til she is trained to go elsewhere).
And who trains her? Well... that would be the Project.
"And they are?" you might be asking...
Well, there is the trick, neither Nicky, or the other 4 teens there, seem to know... and as a reader, you don't really discover that either.

BUT what you do discover is that being stuck in a desert complex with tracking beacons attached at all times isn't what Nicky wants, and never being told where they are going or what they are doing, certainly doesn't make it any easier!

I was quite intrigued by this book, and would be interested to find out what happens to Nicky and the rest of the characters after the end of the book... so I look forward to the sequel.

Score: 6.8
Product reviews for listing 4228: The Other Typist
Written by Suzanne Rindell

A thrilling tale of the intoxicating and dark side of friendship. New York City, 1924: the height of Prohibition and the whole city swims in bathtub gin.

Rose Baker is an orphaned young woman working for her bread as a typist in a police precinct on the lower East Side. Every day Rose transcribes the confessions of the gangsters and murderers that pass through the precinct. While she may disapprove of the details, she prides herself ... more...