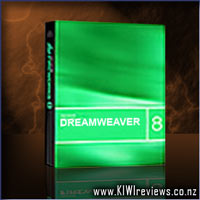 Disclosure StatementFULL DISCLOSURE: A number of units of this product have, at some time, been supplied to KIWIreviews by the company for the purposes of unbiased, independent reviews. No fee was accepted by KIWIreviews or the reviewers themselves - these are genuine, unpaid consumer reviews.
Available:
at quality software retailers.

With Dreamweaver 8, web developers go from start to finish, creating and maintaining basic websites to advanced applications that support best practices and the latest technologies.

I friend of mine once showed me one of the earliest versions of Dreamweaver and told me that it was "... going to be the benchmark web design system one day. {I} should get started with it now..." If only I had listened, instead I waited until only 3 years ago to explore it. Nowdays, with a bit more knowledge of the systems that drive the 'net, I can see how powerful it has become.

As a user of a previous version I had to admit that the layout of the workspace is quite similar in many regards, which will ensure an easy transition from older to new. The speed of operation has noticably increased, naturally, and the smooth integration of extra languages, add-ons and modules has become a major highlight of the newest roll-out.

Some of the new aspects and default workspace will take a little getting used to, but the amazingly powerful configuration capabilities allow you to rapidly fine-tune the layout to suit your individual style. As a test run, I re-ran some old tests from that earlier version, and found that it was still as easy to convert old cludgy HTML into a tidy PHP-driven, database-connected site within minutes per page, and even a sunstantial project such as converting al old inline-style-coded site into a fully css-skinned version took far less time than I would have taken using the most powerful of code-aware text editors.

Overall, as the true leader of the pack, and with ever-more modules to enhance and expand the codebases and datatypes you can work with within it, this is still a stunning package. Now that it is joined into the umbrella of Adobe products, we should start to see some major stuff flowing down the tracks very soon. Still a very powerful tool in and of itself, packaged as part of the Studio Suite you basically have the best web development toolkit you could ask for. Pick a server platform and fire away...

•  Registry Mechanic has been designed with simplicity and functionality in mind and is renowned for its ease of use.
•  It is an advanced registry cleaner for Windows that can safely clean, repair and optimise the registry in a few simple mouse clicks.
•  Fixes problems with the Windows registry that are a common cause of crashes, ... more...