George of the Jungle review 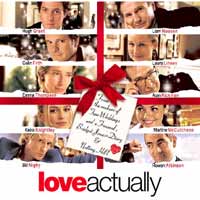 Hugh Grant plays the newly elected British prime minister, a bachelor who falls for a young tea girl (Martine McCutcheon) on his first day in office.

Other tales tell of a happily married woman (Emma Thompson) who fears that her husband (Alan Rickman) may leave her, a widowed father (Liam Neeson) left to care for his only son, and a writer (Colin Firth) who escapes to the south of France to recover from a breakup, only to fall for someone else almost immediately.

I went and saw this with my mum when it came out and really enjoyed it even though I was a young teenager.

The movie follows several different people as they go through life and trying to figure out love and all its swings and roundabouts. There's the new prime minister falling for a staff member, an ageing rock-star trying to hit the top of the music charts, a man who has just lost his wife and is now a solo step-dad, the step-son in love with a school girl and so on. I really liked how they all tied to each other using the whole six degrees of separation ie. the man who's wife dies is friends with the woman who thinks her husband is having an affair.

There's plenty of laughs in this, my husband and I will replay a part at the start where he is trying to sing 'Christmas is all around me' instead of 'love is all around me', plus Bill Nighy is one of my favourite actors EVER. There are also some sad and moving moments and plenty where you are really rooting for the character, like the young lad who does a chase scene through the airport to kiss his love goodbye.

This is a fab movie, for any time of the year.

Definitly one of my favourite movies of all time!

I wasn't keen to watch but after hearing from friends what a great movie it was we got out while my nana stayed with us and have to say we were all raving about it afterwards.

The movie is set around a variety of people telling their 'love stories'. There is not one story that I did not enjoy. Has so many British stars in it and the acting is fantastic could not fault.

Highlights would have to be the Colin Firth story. He is a writer who after finding his partner with his brother ran away to write a book alone. The only company he has is his housekeeper who does not speak english. Love the scene where his book flies into the water and they both jump into the lake to save it and in there own language are saying the same things but opposite so funny. The the end when he goes to declare his love and the whole village follows priceless.

Also love Liam Neeson's son, he is adorable. You can't help but jump up and down while he is running to say goodbye to the 'love of his life'. While Bill Nighy is singing his version of White Christmas naked.

This is such a great movie and caters for either sex. It does not take itself too serious and you just want everyone to have a happy ever after ending. Love It! Great script and great soundtrack. Highly Recommend - you will not be sorry.

Given the high number of stars in this film and the high concentration of big British names in particular, I had very high expectations of this film. Unfortunately, I find when you walk into a movie, expecting the best you are often disappointed. And this is what happened when I first viewed this film. I wanted to like it. I wasn't confused by the layout, or the different stories. I just didn't find myself engaging in the film like I hoped.

Luckily for me, when it came out on DVD, my husband bought it for me. On the second viewing I wasn't expecting to like it at all - given my previous experience. Of course, not expecting anything lead to me really enjoying this movie a lot. I have since watched it again and again.

All the characters are lovely and flawed. Every character is trying to understand their own circumstances, around love. Its a great romp of romance, and comedy. You do find yourself wanting to yell at the screen somewhat too.

Overall I do rate this movie highly. I just wish I could have walked in the first time with no expectations at all.

Love Actually is my favourite movie of all time. I am someone who doesn't usually want to watch a movie repeatedly but this is a movie I get something more out of each time I watch it.

When I first watched it I found it difficult to follow because there were several different story-lines happening in unison. I choose to concentrate on one character's story. In repeated viewings I was able to concentrate on the other characters' stories and how they interlinked.

Love Actually has a very star-studded cast and this made it more appealing to me. I think this is Hugh Grant's best movie.

This movie had me laughing, crying and very grateful to have a special person in my life. Although it is set at Christmas time I like to watch it year round.

I absolutely adored this movie, I think it is the best Hugh Grant movie yet.... of course it helps that there is a huge cast of ridiculously talented actors who add to the movie! I really enjoyed the twists and turns of the plot, and the little wee connections that you missed if you blinked but that gave the movie greater depth and warmth. Although this is technically a christmas movie it can be counted on to give you warm fuzzies at any time of the year... it is well put together, definitely worth watching, and almost guaranteed to make the girlies cry (watch out for the cardboard signs).
Christmas is definitely all around!

I walked in praying that the high number of 'big name' cast meant that this movie wouldn't suck. I was very pleased when I realised the movie was about half way through and I was still enjoying it. A great surprise.

Laughs a-plenty, with lots of 'deep and meaningful' thrown in, there are twists and turns to keep you interested. This is a romantic comedy with plenty of romantic, and plenty of comedy. An over-the-top salesman who doesn't understand 'Hurry up!', an aging rock star with an unfortunate case of total honesty, a confused office manager with a wife, and a flirtatious secretary, a writer with a sleeparound wife, a newly-elected Prime Minister who develops an inconvenient crush on his 'catering executive', plus many more twisted heart-tugging plotlines.

The only downfall of this movie, to me, was purely a personal issue. This movie should NOT be watched by anyone with emotional issues and lives alone. After this movie, you walk out dreading going home to an empty house. You just have this total desire to share the 'Warm Fuzzies' with someone you care about. If you don't have anyone in your life able to fill that space, you run the risk of heading for the pub to drown your sorrows instead. (Hence my low 'see it again' score.)

But, if you are in a happy relationship with someone, this would be the best thing since sliced bread for the soul. You should both go see it together. You'll walk out feeling all glowing from it, I can bet.

Overall, a great movie. Well worth the money to see.

Billy Batson is a streetwise 14-year-old who can magically transform into the adult superhero Shazam simply by shouting out one word. His newfound powers soon get put to the test when he squares off against the evil Dr. Thaddeus Sivana.