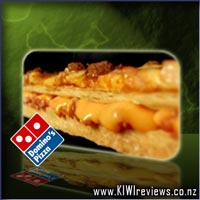 Disclosure StatementFULL DISCLOSURE: A number of units of this product have, at some time, been supplied to KIWIreviews by the company for the purposes of unbiased, independent reviews. No fee was accepted by KIWIreviews or the reviewers themselves - these are genuine, unpaid consumer reviews.
Available:
for a limited time

Cheddar cheese and bacon filling between two crusts with your favourite topping...

Hmmm.... well....
It's been a while since I partook of a Domino's pizza so it was interesting to see how I liked them still...
Having a wicked cold at the time may or may not have affected my tastebuds on this one.

I didn't mind the taste of it all, but for the life of me, can't figure out why they just don't add them as extra toppings instead of making it a pizza that can potentially fall apart!!!

Don't like the surcharge - but kinda expect it in this day and age....
And as for prep time, any food I don't have to cook myself is good when I'm sick!

Well I liked this one a lot better than the triple cheese... It was a lot less rich and not as super cheesy, which is good. To be honest though it really wasn't vastly different to the other layer-type pizzas... all of which have some serious traction issues (sliding toppings anyone?).
Really liked the bacon taste, don't love the surcharge!

I had the double decadence when it came out and was rather unimpressed by it. I thought I would try this type of the same thing to see if they had made it any better... Sadly, I felt they failed miserably. My first (and last) piece started off well, but halfway through the cheddar cheese in between the crusts took on a sickly taste and overpowered the rest of the slice.

Not terribly happy with this crust and given there is a large surcharge on it I doubt I will be going for it again.

With a high surcharge, I was hoping for something really stunning, but alas I was presented with something so similar to another favourite of mine, the Double Decadence crust, that I at first suspected I had been given the wrong crust, despite the confirmation during ordering.

However, once I started biting in, I was presented with a veritable layer of bacon, glued together with a gooey cheese ooze. Amidst the mumbles of mixed impressions around me, I was quite happily munching away on something I found quite yummy. To avoid overcheesing, we had elected to try this crust topped with the Meatosaurus mix... I personally found the resulting combination quite delectable.

Overall, clearly not going to be everyone's favourite, it can prove surprisingly nice if you like that sweet cheese flavour. If you aren't sure though, you can always use the higher surcharge to justify your vote of "No".

A smooth tomato-based Indian-style chutney which is packed full of the flavour of spices such as mustard, ginger, chilli, cumin and poppy seeds, as well as a good hit of garlic. A traditional accompaniment for curries, it is also tasty with cheeses or meats and adds punchy flavour to any casserole or stir-fry mix.

A little mixed with sour cream makes a great dip too.