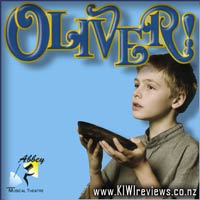 Disclosure StatementFULL DISCLOSURE: A number of units of this product have, at some time, been supplied to KIWIreviews by the company for the purposes of unbiased, independent reviews. No fee was accepted by KIWIreviews or the reviewers themselves - these are genuine, unpaid consumer reviews.
Available:
3rd - 12th August 2006

A foul, stormy night... a young woman, heavily pregnant, collapses in a London street... she is helped into the workhouse, gives birth to a baby boy... and dies...

The Adventures of Oliver Twist, by Charles Dickens, shocked Victorian England out of it's complacency. Legislation to improve the lot of the poor and destitute followed swiftly upon the novel's appearance.

Today the world still has a special place in it's heart for Oliver Twist. But the reasons for the novel's popularity nowadays are quite different. The social evils that Dickens described have been righted, and modern readers now enjoy Oliver Twist for its humour, its compasion, its warm humanity.

Adapted to stage by Lionel Bart.

Once again the Regent on Broadway played host to a fine local production by the Abbey Musical Theatre group. As I took my seat upstairs on the balcony, I say a perspective I hadn't seen before, with the orchestra pit clearly laid out before me. This, it turned out, led to an uncomfortable night...

Suffering a mild middle-ear infection related to flu, the soundscape was a little too rough, with the full sound from the speakers positioned around the theatre for best effect, and the direct blast from the orchestra, shaped by the pit itself, beamed up as well... there were parts of the show I simply had to cover my ears to prevent overload... one of the most uncomfortable was the song segment "I would scream" where poor Mr Bumble, master of the workhouse, is propositioning the Widow Corney, cook and mistress.

However, once suitable sound-dampening devices were employed, the show was a delight to behold. From my perch above, I was grated a view of the mechanics of the show that would have been nearly imposible had I been seated below... with the rotating section of the stage floor allowing rapid and smooth scene transitions, and the wonderfully multi-functional stage sets and props, the show progressed well, with no overly long scene shifts. Well done to the stage crew!

The orchestra was great, if a little enthusiastic in places, giving the show some good dynamics that would have been hard to mimic with recorded instruments. However, the sound engineer should be reminded that when there is music and dialog at the same time, it should be the MUSIC that get's wound down, not the dialog. In some scenes, it was akin to watching bad kareoke, with nary a word being heard over the waves of orchestrated music. Tut tut.

It was a wonderful performance by some great local talent, and it was good to see some familiar faces showing up in key roles, and some fresh talent working up the ranks and making their presence known. Of particular note was Richard Mays, playing a masterful Bill "The Psycho" Sykes, resident bully boss... Steven Sayer as a wonderful interpretation of Fagin, who remindedn me in a highly positive way, of Geoffrey Rush in his role as Captain Barbosa in Pirates of the Caribbean... and also Carrie Green as Nancy, faithful doxy to Bill Sykes. I was stunned to discover Carrie is only 20... you could add a decade and she would still be considered talented beyond her years.

Overall, had I been in a better spot within the acoustic space, I suspect the show would have been far more pleasurable, as the only fault was technical rather than performance. The cast and crew both collaborated to produce a stunning show, full of humour, action and drama, well worth the effort of dressing up and stepping out for a night at the theatre, m'dear...

The name of the company is recognition of the grand masters of Russian Classical Ballet School and the Imperial Family who made such a ... more...