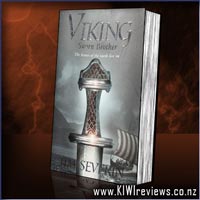 The breathtaking second volume in the Viking trilogy - an epic historical adventure in a world full of Norse mythology and murderous feuds.

London, 1019: a few months have passed since Thorgils escaped the clutches of the Irish Church only to find Himself involved in a capricious love affair with Aelfgifu, wife of Knut the Great, ruler of England, and one of the most powerful men in the Viking world. A passionate relationship between two unlikely lovers begins to unfold, which forbodes uncontrollable consequences...

Forced to flee the realm, Thorgils teams up with Grettir, an outlaw feared for his volatile and brooding behaviour. The two men become travelling companions and sworn brothers - which binds them together beyond death.

From the frozen regions of the and of the Ski Runners, who trade infurs, and along the great river leading to Miklagard, the queen of cities, Thorgils must use his wits to survive among counterfeiters who forge the royal coinage, bounty hunters and slave traders. Finally, in Constantinople, he witnesses the ultimate revenge...

Sworn Brothers continues an utterly compelling journey back in time to a world that is brimming with wonderfully crafted characters and their insatiable hunger for riches and renown.

The story follows the life of Thorgils, one of the last of the Vikings as he struggles with the emergence of Christianity. He roams around the known world of the time and so you get to see what life was like back then in several well known places such as Constantinople.

The characters are interesting and have been well written. This book is good to read if you are interested in this particular time period. It seems to be a very realistic account of the 11th century and is based partly in fact.

For Maddie Morrow, summers at the inn are more than a chance to experience ... more...