« The Lord of the Rings : Return of the King review 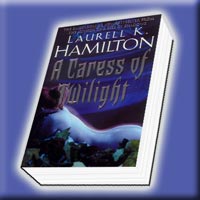 Disclosure StatementFULL DISCLOSURE: A number of units of this product have, at some time, been supplied to KIWIreviews by the company for the purposes of unbiased, independent reviews. No fee was accepted by KIWIreviews or the reviewers themselves - these are genuine, unpaid consumer reviews.
Available:
April 2003

She is Princess Meredith and she is heir to a throne - IF she can stay alive long enough to claim it. Unlike most of her kind, Merry is part human and all too mortal, as her cousin and arch rival knows only too well.

For a deadly game is being played in the Faerie court and whoever produces an heir first wears the crown. But as she auditions her royal guard - illustrious warriors equally at home with gun and blade or spell - for the role of future king and father of her child, Merry is somewhat distracted from her career as a private investigator.

Then, in her adoptive home, in the City of Angels, people start dying in mysterious, frightening ways. What the human police don't realize is that the killer is hunting the Fey as well. It seems chaos awaits, threatening the very existence of the place known as Faerie is in grave danger and Merry finds herself facing an ancient evil that threatens the very fabric of her world. And that's just the day job...

The Other Brother
Rating: 9.5

Asterix and the Chariot Race
Rating: 9.3

The Stolen Stars of Matariki
Rating: 10.0

Having read the first one, I was really looking forward to getting stuck into this one... and was not at all disappointed. Just like "A Kiss of Shadows", this one had me hooked from the first page, all the way through to the last page, and has now left me wanting to track down the third book in the series - Seduced by Moonlight.
Full of magic, lust, darkness, and danger.. "A Caress of Twilight" carries on the story of Merry Gentry as she settles back into her life as Princess Meredith NicEssus, Princess of Flesh, now coheir to the throne of the Unseelie Court along with her cousin Prince Cel, and also as she helps to deal with a powerful killer.. known as the Nameless.
A definite must read for Laurell K. Hamilton fans, and those who love a good fantasy read.

If the land of Faerie were to merge with our 'real' world, could we accept them into our lives, knowing they could destroy us in a heartbeat? Of course we could, if they agreed to strip themselves of their nastier powers and abilities. Which is what they did, and brought them all together into The Nameless, the embodiment of the worst parts of the Fey Folk's souls.

Now, it's out, and hunting. For who or what, only the one who let it lose knows. But how do you capture or destroy your darker side made manifest, when it has all the strongest of your magic inside it, where you can't reach it?

Never one for fantasy in the past, I am rapidly becoming a convert to the genre. With authors of this calibre being brought to my attention, how could I not?

With impressive skill, Laurell Hamilton weaves a wonderous world where the normal folk we know live side by side with the Fey, the magical folk of myth and legend made flesh. The Sidhe, the most human-looking of the Fey, Goblins, the Wee Folk, and all their nastier kin, all make appearances throught this epic novel.

I honestly wondered how she managed to squeeze all this story into a mere 431 pages! It seemed to me that a book twice it's size still could have coped with this story! And this is book #2! I find myself longing to read Book #1, A Kiss of Shadows. Though this book can be read as a stand-alone, I think it would be better read in context after Book #1. There are story elements that are really best explained by reading the first book I think, since they are not really explained in this volume.

I found myself kicking myself for not carrying ti with me always, since when left with nothing else to do, I was craving to continue with the adventures of Princess Meredith NicEssus, aka Merry Gentry, and her collection of guards and lovers. When I was reading, NOTHING seemed to distract me without great effort.

An amazing book, by an astounding author. I look forward to reading more by Laurell.

This beautifully embossed linen hardcover contains all five titles of this very popular NZ series. In 2012 The Little Yellow Digger celebrated its 20th birthday and it is still going strong. An enduring favourite, regularly appearing in the Top 10 bestseller list.