Home > Categories > Games & Puzzles > XBox > The Lord of the Rings : Return of the King review

ProdID: 101 - The Lord of the Rings : Return of the King
Developed by EA Games 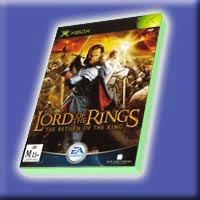 Disclosure StatementFULL DISCLOSURE: A number of units of this product have, at some time, been supplied to KIWIreviews by the company for the purposes of unbiased, independent reviews. No fee was accepted by KIWIreviews or the reviewers themselves - these are genuine, unpaid consumer reviews.
Available:
now

The Lord of the Rings : Return of the King product reviews

LIVE THE MOVIE. BE THE HERO.

FORM YOUR FELLOWSHIP
- Fight with a friend in multi-player co-op mode.

DEFEAT THE FORCES OF EVIL
- Confront Shelob, The Witch King, The King of the Dead, Sauron's Lieutant and more.

MOVIE EXCLUSIVES
- The only game with scenes and music from the films.

When Two Towers for xbox came out, I was really looking forward to playing it. I was let down by the size of the game as I had finished it in two days. With LOTR: The Return of the King game, this is not the case.

You play as Gandalf to start off with and get thrown into the fry back at helms deep. This is great as it fills in certain gaps that the movie leaves out. The controls are the same as Two Towers but in gameplay there is a lot of button smashing. It is very much a hack and slash game.

When you first enter the game you can choose 3 paths to follow. The path of the wizard is playing in the shoes of Gandalf. One level with Gandalf is at Minis Tirith, where you have to run around and supervise everything... not easy. You have to knock back ladders, command the catapults, try and shoot down Nazgul and beat back lots of Orcs.
The path of the King you can choose either Aragon, Gimli or Legolas. All have their own strengths and weaknesses. The third path is the Path of Samwise. Your job is to protect Frodo and yourself. He's not very strong but has some cool tricks.

You can also choose co-op in this game. This is not easy as you have to co-operate which my friend and I did not do, but lots of fun. The voices in the game are the real actors voices and the music and sound effects are the same as the movie. This game is not very easy and has a lot to it. Definately not a two day job. If you like the LOTR movies and don't mind hack and slash games, try this one out. When I get some cash I'm buying this one.

Concept Kids Animals is a game which allows children to discover the animal kingdom while having fun. Everyone plays and thinks!

Concept Kids Animals is a cooperative version of the game Concept, adapted for children who don't yet know how to read In turn, the children attempt to make the others guess an animal by playing pawns on the illustrated icons on the game board. Through this, the child indicates a feature of the animal ... more...