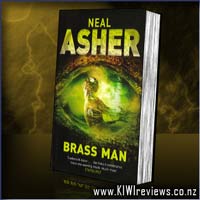 On the primitive out-Polity world of Cull, a latter-day knight errant called Anderson is hunting a dragon.

Little does he know that, far away, another man - though now more technology than flesh - has resurrected a brass killing machine called "Mr Crane" to assist in a similar hunt, but one that encompasses star systems. When Agent Cormac realises that this old enemy still lives, he sets out in pursuit aboard the attack ship Jack Ketch.

For the inhabitants of Cull, each day proves a struggle to survive on a planet roamed by ferocious insectile monsters, but the humans persevere in slowly building an industrial infrastructure that may enable them to reach their forebearers' starship, still in orbit above them.

Meanwhile, Mr Crane doggedly seeks to escape a violent past that he can neither forget nor truly remember... so he continues mindlessly in his search for sanity... which he may discover in the next instant, or not for a thousand years...

This one really took a bit to get into, as it draws extensively on previous titles, but as the story progresses, you are granted enough micro-flashbacks to give you enough of the past to appreciate the story's present.

With all the scope of Iain Banks' 'Culture' series with the highly-advanced AI spread fairly uniformly amongst the human civilisation, with the concept of racial prejudice based on your 'structure of life', ie. are you an organic, or an AI... or even a part of both, as espoused in some of the Hyperion Cantos by Dan Simmons. There is a whole civil war, super-weapons beyond comprehension, uber-entities who stand outside the war-lines, but sought by both sides as allies, or worse... almost too much to absorb...

I was impressed at the level of pseudo-science detail that Neal includes. Having grown up watching ideas first explored on Star Trek becoming reality, it makes me wonder if perhaps this is a herald of humanity's future... or just a wishful dream of a dying species. It would be good to think that we are still around to see such wonders as those the characters behold as common-place.

My favourite character would have to have been the AI intellect of the starship Vulture, especially as it tried to deal with it's somewhat-enforced interactions with the third Dragon Sphere. Even the nasty Skellor stirs some echoes of respect in me, if for no other reason than the sheer power he manages to command... for a while...

Overall, this was a real eye-popper for me. I will be keeping eager eyes peeled as I wander the bookshops, in case I spot some previous titles in the same 'universe'... this is a great storyline, and Brass Man is a worthy vessel for it...

The rainforests of the world are full of animals looking for food to eat and trying not to be eaten themselves!

This book describes the life cycles of ten amazing animals and one creepy plant - how they live, reproduce, and how they link with other creatures in food chains and food webs.

This unique series explores Earth's key ecosystems in an ingenious yet simple way, with cunning picture clues to keep children guessing which predator is waiting to pounce!